District 1 of Tehran had experienced many changes during past few decades and much of these changes, had included few tangible matters, and never considered public’s concept of urban system pattern. The present study, tried to explain pattern language system of district 1 of Tehran, based Christopher Alexander’s theory of pattern language and adapt this theory to public’s concepts. This purpose was done by examining different theories belonging to prominent theoreticians, interviews and maps obtained from public and adapting them to the data of district 1 urban geographic system, live patterns were obtained according to pattern language theory. According to the findings of the research, among five major indexes of space organization (node, edge, landmark, path and district) from Kevin Lynch’s view, nodes had more importance to the people of district 1, and other indexes stood at lower levels of importance. Based on a 4-page format which was used for the first time by Miss Neda Nafeh in her thesis at Waterloo university, in field study format, these nodes were surveyed and analyzed by interviewing team on the pages, and consequently 37 graduals and reticulated live patterns were obtained. Since these 37 patterns were based on public’s concepts, they had the characteristics of being live and natural as well. 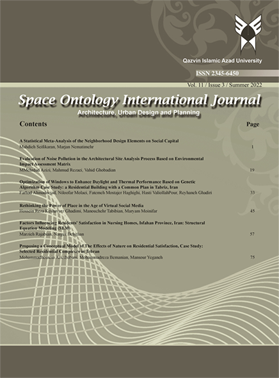